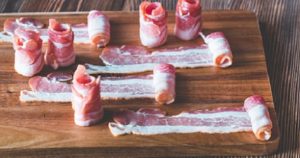 Bacon is a food that many people love. It has the power to turn any boring dish into something incredible, and it can make even the most basic meal seem like gourmet fare. However, how long does bacon last in the fridge? If you’re not sure how to tell if your bacon is bad or how long it will keep before going off, then this blog post may be of interest. Here are some signs that show when bacon goes bad!

Does bacon go off? and if so, when, and how can we tell?

Yes of course bacon has a shelf life, just like anything else. But figuring out when your bacon has gone bad is not as simple as reading the label. Below we have three tests to find out.

How long does bacon last in the fridge?

An unopened pack of bacon can last approximately 2 weeks in the fridge, sometimes a bit more. However always check the expiry date on the package.

An open pack of bacon will last approximately 1 week in the fridge before it starts to spoil.

3 simple tests to see if your bacon is bad

Here are three simple way to determine if your bacon has gone off.

Does it look bad

Unpack your bacon and look to see if there are any mold spots or If there is any brown, gray, blue or green discoloration as these are an easy way to tell if the bacon is rotten.

How does it smell

Take a deep whiff of your bacon. Don’t eat any bacon that smells like anything but fresh meat, such as sour, fishy, or decaying odors; it’s off. If you’re not sure what the odor is, there’s a good chance it’s begun to deteriorate. It’s best to get rid of it.

If you’re still unconvinced, it’s time for the last check. Touch your bacon with clean hands and feel for a slimy or sticky layer around the outside. If the texture is excessively slimy, it’s a no-go. While this will vary on the kind of bacon you use, you’ll be able to tell.

What do I do with bad bacon?

Now that we’ve established a few signs as how-to determine whether or not that your bacon has gone bad you need to dispose of it.

If the use by date has passed and you’re not sure about it then toss it. While it may still be edible do the look, smell and touch test and if you’re not sure then better safe than sorry.

How to safely store bacon?

Keeping bacon cool and away from oxygen is the best method to keep it fresh. Keeping your bacon in a sealed bag in the fridge is the simplest way to accomplish this. Unopened bacon can be kept in the refrigerator for 1-2 weeks. It’s possible to store unopened bacon in the freezer (in a sealed container) for up to six months if you’re proactive and put it there right away. If you fry your bacon, it may be kept in the fridge (in a sealed container) for seven days to reheat later or use in recipes throughout the week

Can I freeze bacon? 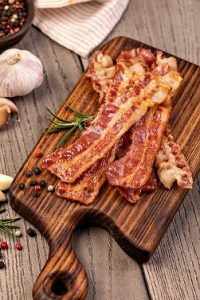 Another choice is to freeze your cooked bacon. When preparing, take the bacon off heat just a few degrees before it’s fully crisp. To absorb extra grease, lay it flat on a paper towel and allow it to cool completely before wrapping in freezer bags for up to three months. Remove as much air as possible from the bags to avoid freezer burn or contamination. Vacuum sealing may also be used after opening to guarantee a tight seal and prevent air entry.

Keep in mind that freezing bacon might alter the flavor, develop freezer burn, or cause fat rancidity. For the best taste, use no more than two months after being frozen.

What happens if you eat bad bacon?

If you eat bacon not stored correctly and/or past its expiry date then food poisoning may result due to harmful bacteria being present within your product even though there are no visible signs that would suggest so.

Overcooked or raw meat of any kind raises the risk of food poisoning since it harbors viruses, germs, and parasites. Toxoplasmosis, trichinosis, and tapeworms can all be increased by consuming raw bacon or meat that has gone bad. Under cooked or uncooked meats also provide a breeding ground for bacteria and viruses.

If you suspect that the packaged food has gone off do not take chances with aliments as they could be fatal especially when dealing with children, pregnant women older adults and individuals who have a weakened immune system due to health conditions.

If you have already consumed bacon that was bad then there are a number of signs that will indicate how serious the food poisoning will be.

Food poisoning from pork may come on quick, or take weeks to surface.

If any one or all signs are present (the key here being multiple), then your bacon is off. You can try using up fats for cooking but this will be detectable by smell and taste, so still not advisable. It might be worth checking how fresh your package was when purchased as well – food poisoning doesn’t have good connotations! In general though, if it smells off don’t chance it – just get rid of it!

Can cookware go in the dishwasher?

How To Look After Cast Iron Cookware

Which cookware is best for Indian cooking? 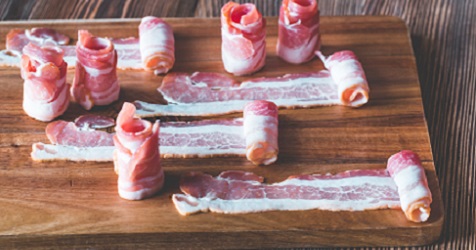 Affiliate Disclaimer: As an affiliate and an Amazon Associate we earn from qualifying purchases. This page may contain affiliate links.